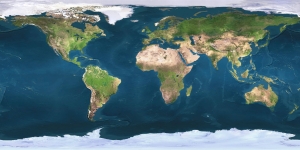 I read a Scripture this morning that says this… “The earth is the Lord’s and everything in it. The world and all its people belong to Him.” Two very different thoughts struck me as I read. The ideas were very different from one another – almost opposites really. They flowed from each of the sentences found in Psalm 24:1.

Generally speaking I think people of faith (not everyone) have ignored or disbelieved the idea that the earth belongs to the Lord. While I may be overstating my case a bit, listen to election year rhetoric from so-called Christ followers and you will hear plenty of talk about family values and very little talk about environmental footprints and the like. I would think the more we believed that the earth really belongs to the Lord, the more emphasis we would give to taking care of it.

The second idea the text portrays is a bit less confrontational and much more hopeful. We have just moved to an area of our country that closely resembles heaven. Our little town of less than 30,000 (as far as the school system goes) has almost equal parts of Asian, African American, Hispanic & Caucasian people in it. I love cultural diversity. I think it reflects the greatness of God. It is beautiful to think that with all of our uniqueness God sees us all as His children.

One thought on “The Greatness of God”