Skip to content
Posted on June 3, 2009 by Rob McQueary 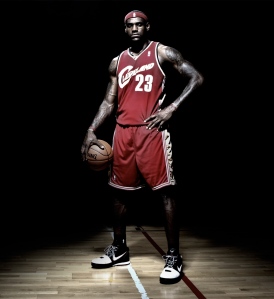 Say what you wish about the most recent demise (there have been others) of the Cleveland Cavaliers. In my opinion LeBron James is certainly one of the greatest players of all time. He is an incredible talent that can do it all… or can he? If you mean do it all in terms of versatility… the answer is probably yes. But clearly he cannot do it all as the Cavaliers have once again missed the NBA Finals. What’s the problem?

The problem is illustrated by the picture to the left. There is a spotlight. And there is only one man in it.

My experience in the church has been that we often create a very similar situation… and I would say, reap a very similar result. Inadvertently (sometimes intentionally) we arrange the church to be about the leadership. It makes for neat and clean organizational flow charts, but leaves ministers who are burned out and parishioners who see themselves as mere spectators.

Do you understand what really happened in Chicago basketball in the 90’s? The Chicago Bulls won 3 consecutive championships… twice. And though some would say it was all because of Michael Jordan, the reality is that it had more to do with the fact that Michael Jordan knew how to make everyone else better.

That’s what I want to be remembered for. Not the guy who was the best Christian leader of all time, but the guy who made everyone around him better.

2 thoughts on “The One Man Show”